Blog - Latest News
You are here: Home1 / What is Tantra about ?

Tantra literally means a tool for expansion. In spite of the Eastern terminology, Tantra is an easy concept to grasp. At it’s heart is the knowledge that a powerful current of energy flows through us all, which needs to be harmonised.

Tantra precedes Buddhism and Hindu beliefs and is concerned with self-realization & development, not by suppressing desire and renouncing worldliness, but through harnessing the potency of desire, and pursing bliss here and now. It’s a science not a faith. Tantra aims at total surrender – letting go of mental, emotional and cultural conditioning – so that universal life energy can flow through us effortlessly as a stream. It’s about letting go into a sense of one-ness with the universe, which spiritual teachers of all paths describe simply as love. 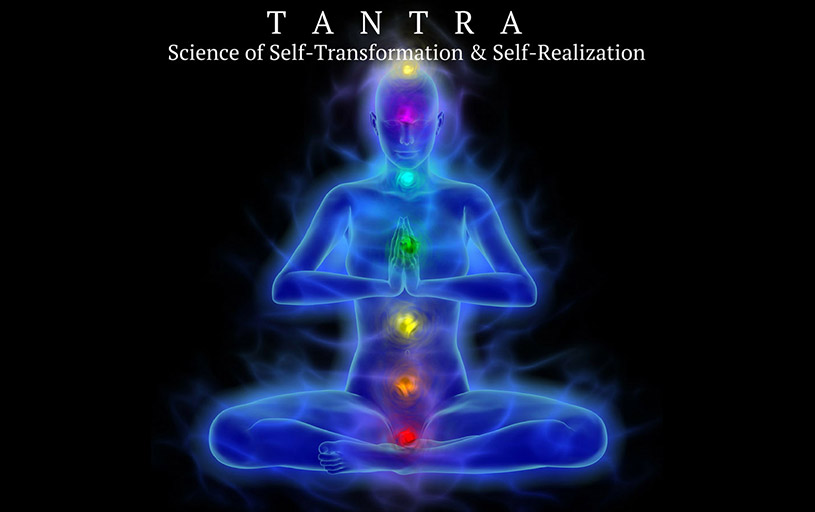 The roots of Tantra are somewhere in the prehistory of Indian religions: Hinduism, Buddhism & also Jainism. Tantra is best understood as a group of texts and practices geared towards direct experience. Tantra developed partially in revolt against the hierachy of orthodox Hinduism as it was open to all castes and men and women were considered equal. In the Buddhist way, Tantra is the highest path to enlightment, with the aim of achieving enlightenment in one lifetime.

The goal in Tantra is to merge the phenomenal world with the divine, in one integrated, unified reality, referred to as non duality. Tantrics believe that in order to fully experience this reality all that is needed is a change of awareness. You are already divine, you just have to wake up to the fact. You don’t need to change anything about yourself or work to achieve anything – you are innately divine. Paradise is here and now.

Tantric practices include rituals to stimulate the five senses, meditations, yoga and breathing exercises as well as massage to help achieve a blissfull state of mind. The release of Kundalini energy stored in the base of the spine, often depicted as a three and a half coiled serpent. This energy is moved up through the seven Chakras or ‘wheels of energy’ from the base of the spine to the crown of the head. This is known to produce visions of flowers and rainbows and lights and feelings of ‘expansion’. (read more about Chakras system)

The word Tantra comes from the Sanskrit roots “tanoti” meaning “to expand” and “trayati” meaning “liberation”. Through the expansion of consciousness, liberation is attained.

There is no one fundamental Tantric text or scripture- there are many. Sutras may take the form of a conversation between Divine lovers, Shiva and Shakti, the archetypal male and female principles, or the form of a song, sang in ecstasy. For example, the Song of Saraha is a spontaneous and direct communication of ultimate reality, communicated via metaphor, which has the capacity to transport the listener into a deeper dimension.

Saraha was a ninth century Tantric Buddhist, who introduced the practice of mahamudra, meaning the “great symbol”. The Tantraloka, compiled by Abhinavagupta and written in the 11th century, is a summary of many of the previous Tantras. It includes the contents of the three branches of Kashmiri Shaivism, including the Shiva sutras, originating directly from Shiva himself.

One of the oldest known Tantras, the Vijnanbhairava Tantra, which is over 5000 year old, does both. It is a dialogue between Divine lovers, the male and female principle. I shall include several excerpts from this, and I invite you to let go of striving to understand them mentally, and instead allow the poetry, the qualities expressed beyond words, to touch you.

Tantra is about fully embracing the physical world. Nothing is separate from the Divine. Tantra invites us to enter deeply into the experience of each of our five senses, with awareness and presence. In so doing it is possible to meet the essence, Unity.

“Imagine the five coloured circles of a peacock feather to be your fives senses disseminated in unlimited space and reside in the spatiality of your own heart.”

Instead of renouncing the body, Tantra advocates the inner marriage of energy and consciousness – becoming acutely and intimately aware of the subtle energy processes within and beyond the physical body, and through so doing, transcending the physical.

“If you meditate in your heart, in the upper centre of between your eyes, the spark, which will dissolve discursive thought will ignite, like when brushing eyelids with fingers. You will then melt into supreme consciousness.”

“When you realise that you are in every thing, the attachment to body dissolves, and joy and bliss arise.”

One of the main principles in Tantra is that the senses are gateways to the Divine.

“At the time of euphoria and expansion caused by delicate foods and drinks, be total in this delight and, through it, taste supreme bliss.”

We eat and drink every day. It is possible to open up completely to the sensations of eating and drinking, and to taste what lies beyond the physical. This can occur when the practitioner is fully present in the moment. Allowing oneself to become totally absorbed in sensuality is, in itself a meditation practice, which develops presence.

“By being totally present in song, in music, enter spatiality with each sound that rises and dissolves into it.”
Vijnanabhairava Tantra

“In summer, when your gaze dissolves in the endlessly clear sky, penetrate this light that is the essence of your own mind.”
Vijnanabhairava Tantra

Tantra is not a religion, although Tantric symbology and practices have emerged throughout history in all religions and cultures. Representations of the sacred union of the masculine and feminine principles, and the non-duality of this “sacred inner marriage” can be found as far back as 2000 BC in the Indus Valley civilization and the Egyptian old kingdom. Tantric principles are inherent in mystical Judaism (Kabbalah), Christianity and Sufism. Chinese Taoism is another strand of Tantra.

Tantra most obviously emerged in India, between 300 and 400 CE, when the first Hindu and Buddhist Tantric texts were written down, as poetic metaphors pointing to oneness and Divine love. These first writings were purposely obscure so that only initiates could understand them. Before that time, Tantric teachings were closely guarded and transmitted orally from master to disciple only after long periods of preparation and purification.

Tantra reached its climax in the 11th and 12th centuries, when it was practiced widely and openly in India. Tantra refuted the prevalent notion that liberation could be attained only through rigorous asceticism and by renunciation of the world. Tantrikas (tantric yogis) believed that human suffering arises from the mistaken notion of separation. It advocated celebration of the sensual and through so doing transcendence of the physical.

Tantra has been and still is practiced in three main forms: the monastic tradition, the householder tradition and by wandering yogis. Whereas Hinduism had many rules and laws, including strict divisions of caste, Tantra was totally non-denominational and could be practiced by anyone, even within daily life.

With the invasion of India in the 13th century came widespread slaughter of Tantrics and destruction of their manuscripts. Tantra went underground, where it has predominantly remained since. Tantric Buddhism was notably preserved in the monasteries of Tibet. After the Chinese invasion of Tibet, when monks and nuns were murdered and manuscripts destroyed, those who escaped have found ways to sensitively disseminate this knowledge more widely.

It is customary to divide Tantric paths into two sectors. Those where the individual practitioner works with his/her own sexual energy, mostly internally, are called “right-handed” paths or “white Tantra”. Then there are Tantric approaches that do involve direct sexual contact between love partners, and these are called “left-handed” Tantra or “red Tantra”. These terms, however, are themselves part of a more modern system of classification.

In the west, today, traditional Tantric practices can be found within the Tibetan Buddhist tradition, and via the Kundalini and Kriya yoga schools, all of which are right-handed paths. There is also the Taoist tradition, which has only slightly been modified, and this is a left-handed path. Daniel Odier was initiated by Lalita Devi in the Himalayas, in the lineage of Kasmimir Shaivism.

The main practices that he teaches are sitting meditation, the “tandava”, a form of very subtle free movement, where practitioners contact more and more refined states of the “divine tremoring” a resonance with the essence of life, and Kashmiri energy massage.

Traditionally, Tantric masters did not advertise themselves, and this is mostly still true today. Many exist, particularly in India, and I am sure in the west too.

/logo2.png 0 0 Tantric Massage Guide /logo2.png Tantric Massage Guide2018-04-16 10:09:282018-04-16 10:09:28What is Tantra about ?
Tantric wisdom says that “While ordinarily, an ignorant person can fall into decline because of sexuality, another intelligent and daring person who controls himself can rise and progress precisely with the help of sensuality.”- quotation from Tantra master
Add Your Business

Tips to convince your partner to try Tantric MassageYou, Sex and Sexism – the politics of massage
Scroll to top
Don`t copy text!