Blog - Latest News
You are here: Home1 / Tantra vs. Neo-Tantra

Today we invited Yoyo from Secret Massage to share some of her experience in Tantra, Neo-Tantra and tantric massage.

When I first started with tantra, it was just one big blurry concept for me. Some years later I realized that there are more flavors to it, and I now have my feet in two worlds, traditional tantra and neo-tantra. I’m passing on what I’ve learned in my neo-tantric training in Finland and now I’m learning traditional tantra and tantric yoga to deepen my practice.

Tantra and neo-tantra are broad topics, and it’s not easy to describe them. Some say tantra is a “spiritual science,” and some call it a philosophy or even a religion. There are many translations of the word tantra and perhaps the most common one is that tantra is a weave, making everything interconnected, an underlying structure of All That Is. Yet another common interpretation for the word tantra is to expand and liberate. Literally, tantra means a theory, doctrine or book, such as well known Vijnana Bhairava Tantra.

For the sake of clarity, I will use “tantra” for the traditional or classical tantra, and “neo-tantra” for sacred or tantric sexuality.

Neo-tantra is a somewhat new concept. From the lectures at Shri Kali Ashram and a from a recent workshop by Christopher Wallis, I have now gathered that neo-tantra was mainly invented by Alistair Crowley and Pierre Bernard a bit more than a hundred years ago. They had some knowledge of tantra, but they were not initiated in it. Both of them were kind of showmen, good at improvising and they probably made up some of the things they taught.

Somehow tantric ideas got pulled into the sexual freedom and feminist movement, and the origins were not clearly made known. The teachers passed on the information to their students, and it started to look like a tradition, in a way.

The well-known (and controversial) guru Osho had a massive impact on everything we know as neo-tantra today. Osho did not follow a traditional tantric lineage but instead made up his own version of tantra, which became extremely popular and widespread. You can read more about Osho here.

The teachings of neo-tantra often include sensual practices such as touch, being present and connecting with your partner, or arousing sexual energy in some way or another. These can be great tools to increase intimacy in your close relationships. They can also be helpful in healing issues with body image or self-esteem.

Typical to neo-tantra workshops is the fact there are practices combined from different sources, according to the interest and experience of the teacher. These sources could be anything, from dance and movement to deep somatic and psychological work. In that sense, the neo-tantra workshops could be called “therapy tantra.” Many of the Taoist exercises popularized by Mantak Chia have become mixed into the neo-tantric stew. Mantak Chia has written an enormous amount of books about sexuality, orgasms and energy practices, such as the Multi-Orgasmic Couple or Sexual Reflexology.

The tantric massage is also often part of the neo-tantra teachings. It has become increasingly popular during recent years. Tantric massage does not originate in traditional tantra, but rather is a recent, Western invention. Such a massage could include a sensual or energetic bodywork, or yoni or lingam massage. It can be very intimate, and a lot of trust is required between the therapist and the client.

And as sexuality is one of the most intimate areas of our lives, unfortunately there are sometimes events where some participants feel their boundaries are violated in a workshop by an abusive teacher or massage therapist. In a workshop setting with social pressure, it can be difficult to stay centered and say NO when necessary. That’s why it’s essential to teach – and learn – what is consent.

I recently saw an advertisement for a neo-tantra workshop, where they promised there would be “no eye gazing, breathwork, cuddle-puddle and drumming.” Perhaps it’s an indicator that these practices have had a place in the past, but now people are noticing that it’s not bringing the lasting fulfillment many of us are after.

Traditional tantra is characterized by a set of traits, such as rituals or pujas, worship of deities (which are seen as an aspect of the one all-pervading Awareness), use of mantras, and understanding and working with the subtle body. Importantly, it’s considered a rapid path – liberation is possible in this lifetime.

In tantra, the body is seen as sacred, as a temple compared to the Vedantic view where the body is seen as a hindrance to the enlightenment and should be transcended. The highest attainment in tantra is to find the pathway to the Unity, and then to return back to the mundane, to live a life on the material plane as an awakened being.

The tantric idea that anything can be a spiritual practice has brought about some misunderstanding. For example, in traditional tantra, some practices have to do with sexuality, but that does not automatically mean that sex becomes a spiritual practice. You need to know what to do and how to work with your subtle energies. The goal of the sexual sadhana is liberation, not just the peak experiences or heightened states of consciousness many are after.

One of the very practical differences between tantra and neo-tantra is that traditional tantra is an initiatory practice and most often not taught in short workshops. Traditional tantra requires commitment and dedication to the path, whereas in the neo-tantra world the trends seem to come and go. It appears that the tide is shifting a bit so that people are actually more inclined to the authentic and sincere spiritual practice offered by tantra.

The role of a guru is essential in the traditional tantra. It may seem like an odd idea to the Western mind at first. To study with a guru does not necessarily mean that one should blindly obey them and stay with them for years. The guru is there to show you a way, to guide you and help you to recognize and let go of your conditioning and false self-images.

Traditional tantric systems are well-tested and practiced over a long time, hundreds or even thousands of years. In that way, they are a timeless tradition. I feel I have become a bit more of a traditionalist during the last few years. That means it feels better for me to do practices from sources I can trust where there’s a definite “goal” the system will take you. (In tantra, it’s not really a goal, for there’s nothing to attain, but rather the goal is to let go and recognize your True Self.)

Which way to go?

I first started my tantra journey through the Taoist sexual exercises, then got to the neo-tantra and later on to the traditional tantra. I’m actually happy about this path, for I would not have been able to be at peace and ease with sexuality otherwise. I wrote a personal story about my journey in this blog post.

If you yearn for a solid spiritual practice it may be worthwhile to look into the traditional tantra instead of neo-tantra. Tantra is a rich and deep tradition, which will take you all the way to Moksa, or Liberation.

It would be great if everyone offering tantra or neo-tantra would define and describe their work better, to avoid creating more confusion!

How do you see neo-tantra compared to traditional tantra? Leave your comment below!

What Does a Man Get From a Tantric Massage? 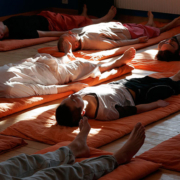 The begin of the Tantric Massage qath

My journey into Tantra
Tantric wisdom says that “While ordinarily, an ignorant person can fall into decline because of sexuality, another intelligent and daring person who controls himself can rise and progress precisely with the help of sensuality.”- quotation from Tantra master
Add Your Business

What is Tantric Sex? PART ONE
Scroll to top
Don`t copy text!