Blog - Latest News
You are here: Home1 / The Importance of Touch

In our so-called permissive society, in which most of our senses are so richly catered for, it is amazing that the sense of touch is ignored. This has sadly come about because, over the centuries, touching others has come to be seen as having a sexual connotation.

Certainly sex does involve touch but is quite ridiculous to avoid all touching on the basis that a gesture might lead to sex. This is exactly what has happened in the Western world.

Because many of us, once past early childhood, touch and are touched so little we understandably find it difficult to touch others in any circumstances – even sexual. There are many couples who engage quite happily in all kinds of sexual acts for years yet they are intimidated by touching each other because they are unused to this particular form of intimacy. Such people can truly said to be ‘out of touch’ with their bodies. Indeed, with many men the constant demand for more sex is frequently an unconscious desire to touch, be touched and to feel a sense of closeness. They believe, erroneously, that they should not ask for touching for its own sake and so try to make it ‘respectable’ by including genital activity. After all, in our culture, men aren’t supposed to ask for a cuddle or stroke, which is a great shame.

Although no one can be absolutely sure, it appears that touch is the first sense that we develop in the womb. So touch is a primal sensation, which even in adult life, takes us back to our earliest days in the womb. This understandably makes touch very special to human beings. A US study found that people who are prevented from touching or being touched felt painfully alone and isolated. People’s perceptions of how much they were touched was closely related to their sense of personal self-esteem. Clearly touch has implications for us that go far beyond making things better when we are ill – the ‘medical’ purpose of massage.

All kinds of pains, emotional or physical, evoke a response that usually involves touching of some kind. When a child falls over the parent loving ‘rubs it better’ and holds, kisses and cuddles their child. All of these actions convey to the child that he or she is loved and valued. Doctors and nurses touch their patients, albeit in a clinical way. Healers throughout history have performed the ceremony of the laying on of hands and most of us feel we want to touch, hold or cuddle someone we care for when they are distressed or ill.

Touch is a vital communication system that says, ‘I care for you’ and whether we are three or ninety-three it unconsciously takes us back to the time when we were babies in our mothers’ arms. We feel safe.

Unfortunately, as we grow up we receive less and less in the way of loving, physical contact and boys especially are taught – usually quite unconsciously by their parents that they should be tough. They should not need cuddling, touching or kissing in times of adversity. However, it is a fact that we never outgrow our needs for touch and in today’s nuclear family we have all too few people who are available to give us such attention. By and large it is more difficult to accept touch from a stranger and yet ironically members of our own families have become virtual strangers. 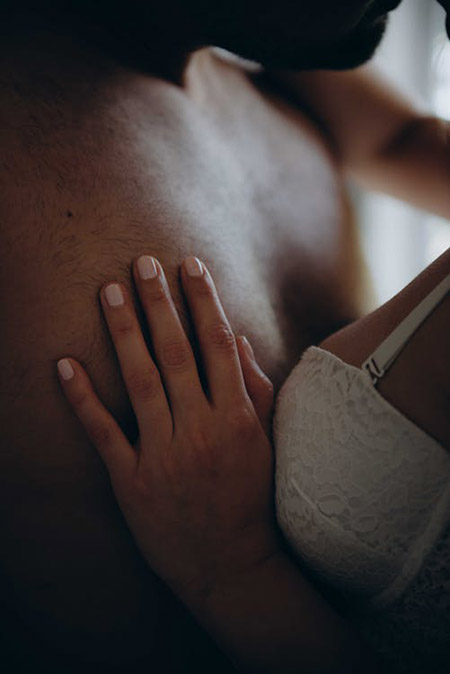 The least stringent anti-touch taboo is between mothers and daughters – because they are of the same sex and it is accepted in our culture that women are by nature more emotional and caring. As a result, women fare better in adult life, being far more willing and able, to touch one another non-sexually without feeling bad about it. Men, in contrast, can be almost phobic on the subject. Men will cuddle babies, because they are said to be ‘asexual.’ However, as their children grow up and develop clearly defined sexual identities, some men become increasingly ill at ease touching them at all, for fear of being seen as sexually provocative. This is a huge shame. Heterosexual adult men almost never touch one another if they can help it. This does not mean that men cease to need to be touched, rather they find ways that are culturally sanctioned to satisfy their needs. This they do in a sexual relationship with their partner or in sporting activities where touching is permitted.

However much we try to fool ourselves, touch is so basic to our human condition that we all try to get it in whatever way we can. For example, many women who do not have a satisfying relationship with their husbands say that touching and cuddling their children helps to compensate for lack of such contact in their adult relationship. It may even be the case that some women have more children to hold onto the closeness of physical touching and togetherness when their earlier offspring become more independent.

The distinguished psychologist Alexander Lowen feels that schizophrenia may come about as a result of a lack of touch in early life. The schizophrenic is seen as being ‘out of touch’ with himself. There are also studies that show links between touch deprivation in childhood and later violence.

Human beings were, indeed, made to touch and be touched. If this were not so, it would be unlikely that such a great proportion of our brains would be devoted to the sense of touch. If we all just simply relaxed and allowed time to touch and hold those important people in our lives, we would all be more physically and emotionally well balanced. So uncover the explosive power of touch and discover a whole new level of bliss!

Tips to convince your partner to try Tantric Massage

Guide to Tantric Sex
Tantric wisdom says that “While ordinarily, an ignorant person can fall into decline because of sexuality, another intelligent and daring person who controls himself can rise and progress precisely with the help of sensuality.”- quotation from Tantra master